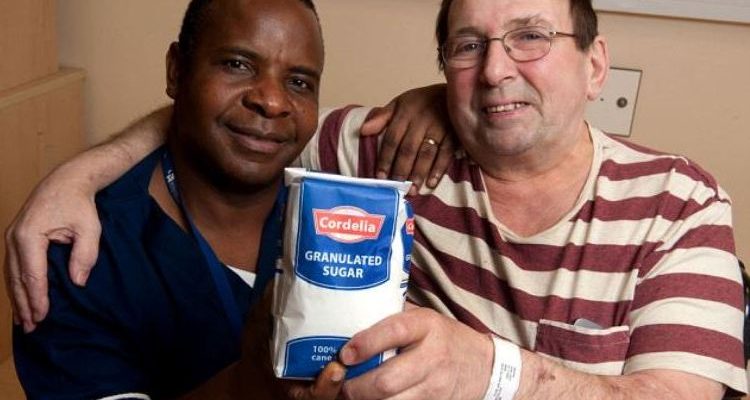 Too much sugar may be bad for the waistline, but it could help doctors heal the sick.
New research shows folk medicine from Africa may hold the key to treating wounds that defy modern medicine.
A study found granulated sugar poured directly into bed sores, leg ulcers and even amputations promotes healing when antibiotics and other treatments have failed.

The study is headed by Moses Murandu, a senior lecturer in adult nursing at Wolverhampton University, who grew up in Zimbabwe where his father used sugar to heal wounds and reduce pain when he was a child.
Sugar draws water from the wound into a dressing – bacteria needs water to survive – which allows accelerates the healing process, or kick starts it where progress has stalled.

When Mr Murandu moved to the UK he realised that sugar was not recognised as a traditional medicine that had something to offer.

One of the patients receiving treatment as part of the research is Alan Bayliss, from Birmingham, who was being treated at Moseley Hall Hospital’s amputee rehabilitation ward.
He underwent an above the knee amputation on his right leg due to an ulcer at the Queen Elizabeth (QE) Hospital Birmingham in January 2013, and as part of the surgery a vein was removed from his left leg.
For his post-surgery rehabilitation, Mr Bayliss was moved to Moseley Hall Hospital where standard dressings were used but the left leg cavity wound was not healing effectively.

Nurses contacted Mr Murandu and Mr Bayliss was given the sugar treatment and within two weeks the wound had drastically reduced in size.